People jumping the barriers rather than wait for several trains to pass, is one of many issues facing Network Rail. So after years of campaigning for a safer crossing at North Sheen Susan Kramer must have been thrilled to learn that Network Rail had agreed to install a pedestrian bridge. But when a standard 'off-the-shelf' design for the bridge was proposed (as shown here), the community raised its concern that 'practical' and 'safety' does not have to mean 'ugly' and 'ill-conceived'. 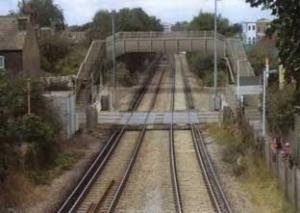 There is no doubt the site is highly constrained, with even the standard design not quite fitting into the available property boundary. However, Richard O'Brien from Network Rail said he was keen to have a pedestrian bridge in place during 2011 and therefore pledged support to help Richmond Park MP Zac Goldsmith launch a design competition (for a new, more aesthetically pleasing footbridge). In this way he agreed to offer the public a chance to influence what the finished bridge will look like. Is this "The Big Society" in action? Maybe... If so, does such an approach work well?

Professional bridge designers and architects would probably say "No". But, on reflection I think it was worth playing this one out.

My understanding is that the first few designs offered up by members of the local community simply served to underline the huge gap between well intentioned amateur ambition and the actual ability to deliver a viable and long-lasting solution. As a result Councillor Katharine Harborne of the North Richmond Ward asked us (Mark Wing and Richard Woolf), as creative consultants to offer a design for consideration by the panel of judges.

Richard of McDaniel Woolf, the Richmond based architectural practice working with Interrelated on the Radnor Bridge proposal, said that the key to designing a good bridge for the Sheen railway crossing was to deliver against several criteria. (i) It was obviously important to address the concerns of local people (in terms of anti-graffiti, safety, accessible, etc) (ii) Any designs must take into account railway requirements, such as easy inspection and maintenance access. Done correctly it might even be possible to establish new standards for Network Rail footbridges nationwide. (iii) All architecture needs to be aesthetically pleasing. Think of it as a very large piece of furniture in the town centre, it is clearly going to play an important role in shaping the impression and experience of living in Sheen. (iv) Perhaps most importantly, it must have an innate quality that will allow it to become a 'classic'. This is because the chosen design will not be cheap to implement [Network Rail has set aside a budget of £1m to implement the approved concept] and will be around to serve the community for many years yet. The design cannot therefore be too fashionable or 'flavour of the month' as it will need to be able to stand the test of time.

There were several architects who offered up suggestion for a more aesthetically pleasing Sheen bridge and there were seven contenders exhibited at the event on 19th May. I don't have images to show you here, but over the coming months I believe they will be exhibited again in York House. 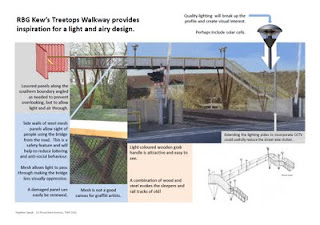 The winning design (shown here) was by Stephen Speak, a local resident with no formal creative or architectural training. In many ways the solution delivers what the local community wants and there were enough of Stephen's friends and family in the room to ensure it received the winning votes. It will now be interesting to see how Network Rail develops this design concept so that it can legitimately exist without infringing patent and/or copyright laws. I say this because the design proposed is unashamedly plagiarism. Stephen was inspired by the aesthetic design of the treetop walkway at Kew Gardens, designed by Marks Barfield Architects who were also behind the creation of the London Eye. The walkway was designed to enable visitors to enter the canopy of sweet chestnuts, limes and deciduous oaks and in so doing get up close to the birds, insects, lichens and fungi that rely on them.

The design of the Canopy Walkway at Kew Gardens is clever in that it blends in with the natural surrounding very well, perhaps primarily because the supporting structure is not domineering. You can therefore understand why Stephen chose this as his source of inspiration. The local community does not want a heavy duty bridge but instead a delicate crossing allowing good views along the railway line; west towards Richmond and east towards Waterloo. Our congratulations go to Stephen for his inspired thinking, but the challenge is now there for the Network Rail bridge designers to develop the design so that it is uniquely theirs. 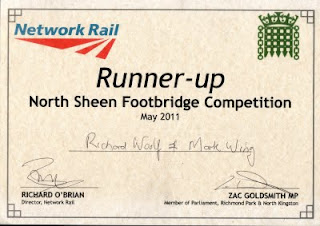 Our Bridge Design - Runner Up

At first Richard and I considered a wide range of issues, including the proximity of the station and how to improve access to the platforms.

Personally I felt that the new bridge needed to work harder to improve the whole experience of using Sheen station (not just a means of crossing the railway when the gates are closed), but this was clearly out of scope. And, if I had any doubts about this they were laid to rest at the Design Meeting on 19th May when, Zac Goldsmith confirmed that all debate about the position and role of the bridge had already been had and the focus now was merely to design a more aesthetically pleasing bridge.

We were inspired by the appearance of an arbour in Hampton Court gardens. Once the green leaves spread across the arbor they let light through with a fabulously dappled affect while enveloping a cosy passage way for people to pass through. A more attractive route over the railway line was hard to imagine. So if you combine this idea with the ornate beauty of laser cut steel panels, a potentially classic design is in the making.

Perhaps the following images of similar fabrication techniques go someway toward understanding what it might look like. The technique is widely used on commercial buildings and CNC [Computer Numeric Controlled] metal manufacturing has been around for 15 years and is cost effective to programme. 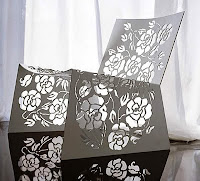 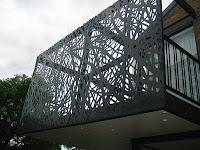 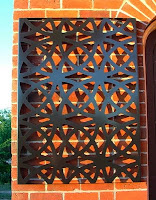 Our bridge design for the North Sheen Footbridge Competition, arranged by Zac Goldsmith, was presented as follows:

Picture yourself walking through an arbour.

Enclosed and safe, organic forms and textures surround you. Whether on a sunny day, or at dusk when artificial light throws random natural shadows, the experience is both controlled and manmade, but also natural and familiar.

Turning a railway footbridge into anything other than a utilitarian experience is a challenge. Our proposal hopes to bring surprise and delight to an otherwise mundane activity. The bridge becomes an elevated arbour in steel: robust and safe, whilst being unique and unexpected.

We propose that the base engineering already established for the bridge is retained. It's clear that over 180 years the evolution of the rail footbridge has been based on sound practice, value engineering and functional requirements. Solid side panels both retain and provide monocoque structural integrity, whilst the geometry of span and half and quarter landings satisfy the strict requirements of safety and performance.

The longevity of the structure and ongoing maintenance is paramount. The whole life cost of the footbridge is far more important than the initial capital cost of installation. It is the next 100 plus years of it's performance that will mark it out as a successful design. The new proposal can't just be fashionable, it has to literally stand the test of time.

The current design has evolved from engineering practice only. The structure is homogeneous in nature and lacks any context or emotion. In inviting design proposals for the North Sheen footbridge we get a chance to look anew at the generic solution proposed.

Rectalinear in form, the current design answers the brief of getting from A to B and nothing more. There are anomalies which should be questioned, such as the reduction in the stair flight widths to the south due, we assume, to the location of CCTV cameras and safety control equipment.

Relocating these elements would give a continuous width to the stairs over the whole span. The small flights to the high level bridge span, although breaking the pedestrians exertions over a long travel distance, mean there are no visual sight lines around the corners. Although the mesh panels do give some view from the stairs to the high level platform, those using the bridge are not able to anticipate what is around the corner.

Working with the current principles of the bridge, we propose the following: 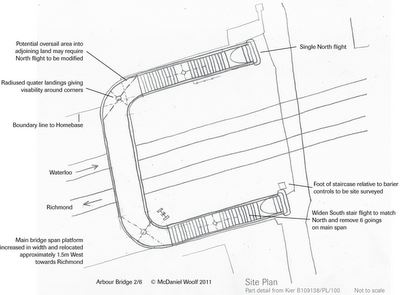