Our hope is that the Radnor Bridge will become a strategic connector in the area. Improving accessibility to both sides of the river and opening up a more convenient route for commuters and pedestrians alike.

We have received emails from mums and dads in the area who long for a simpler and safer route for their children to take to schools on the opposite side of the river.

The crossing at Teddington lock is not particularly bike friendly but is also often overly busy with pedestrians and commuters at peak times. And yet to get to the bridge at Teddington many people have to make a detour along busy roads. 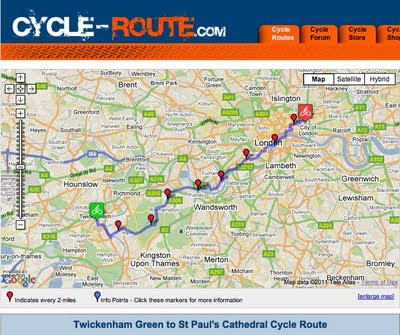 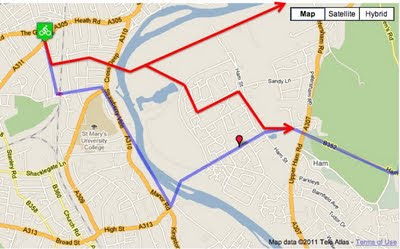 For example, this cycle route I found on CycleRoute.com describes a fabulous bike journey from Twickenham Green to St Paul's in Central London. I am sure it is enjoyed almost daily by fair number of our keen cycling commuters.

Wouldn't it be better if the cyclists could avoid delays at the Strawberry Hill railway crossing and simply turn left earlier to head out across a purpose built bridge for cycles and pedestrians from Radnor Gardens to Ham Lands? While avoiding the often busy and congested roads to Teddington, this could then lead them through to Ham Gate, and into Richmond Park, or alternatively offer the choice of entering at Richmond Gate too.

To get to across the river at Radnor Bridge will take a matter of minutes.

To travel via Teddington Lock, in order to cross the river, means adding to the existing congestion on the roads. And to travel by bus to the same position on the other side of the river will take the best part of an hour.

Let me leave you with this question; How many commuters on the congested roads between Ham and Twickenham do you think are people who could do the same route in a fraction of the time, by bike or on foot, if Radnor Bridge existed for real?