We called it Radnor Bridge for a reason - what's your thoughts? 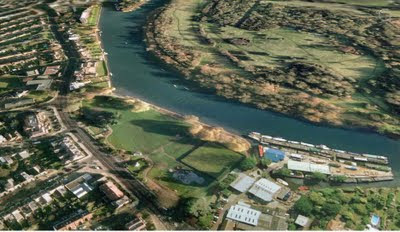 I am writing this article because,

if you live in the Twickenham or Ham area, or simply have an interest in being able to cross the River Thames in this part of London, then Richard and I really do want to hear from you.

In 2010 at the Barefoot Consultation held in Twickenham we proposed that a bridge should be erected across the river to connect Twickenham and Ham. For more information see the blog here: http://radnorbridge.blogspot.com/2011/02/community-building-bridge-over-river.html

We called it Radnor Bridge for a reason. Many people have suggested a bridge would be useful, but few are sure about where the bridge should be. Some have suggested they would like to see a bridge closer to Twickenham town centre or even at Marble Hill Park. However, in our opinion both of these locations are less suitable than Radnor Gardens. We are not interested in seeing a bridge located anywhere along the river in Twickenham because we genuinely believe that Radnor Gardens is the right location; 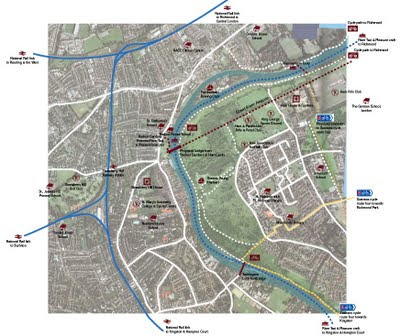 - It fits with the proposed landscape strategy for the Ham side of the river and it supports the 'half way' post between Richmond and Teddington more effectively - creating the perfect circular walk. Just take a look at the satellite view shown here.

- With everyone's focus always being on the town centre, the Strawberry Hill end of Twickenham often gets forgotten and yet it is an area of dense population in need of access to a large area for recreation purposes.

- Surprisingly Radnor Gardens is passed by thousands of people in their cars every day without notice because it sits down the bank, a little out of sight and squashed between the road and the river. Yet, this stretch of the river is the longest and most visible aspect of the River Thames running past Twickenham. Surely it is deserving of an architectural feature, as an important aspect of the Twickenham river side.

The historic importance of these gardens is not unnoticed by us either. Radnor Gardens dates from mid-18th century when John Robartes of Twickenham, who became the 4th and last Earl of Radnor in 1741, had as his neighbours Horace Walpole, who built Strawberry Hill House, and Alexander Pope of Pope’s Villa. We obviously respect the fabulous work that The Friends of Radnor Gardens have been doing, restoring the summer house and gazebo and holding a regular Music Day and Crafts Fair for the enjoyment of local residents.

We are aware the Friends of Radnor Gardens have raised a concern that a bridge may dissect the gardens and obviously therefore affect the landscaping and plans for future concerts and festivals. With this in mind we have reconsidered the access route to Radnor Bridge, proposing it is now adapted from the path entered opposite Pope's Grove. A raised path, for access to a bridge which will span the river at the correct height (to allow sailing masts beneath it) will mean that a grass bowl effect could be created around the Gardens, facilitating an amphitheater type layout. The river side path could easily continue under the bridge and could even afford access to a Pontoon, Ferry boat rides and river taxis located beneath. In addition, because this will be a cycle and pedestrian route, we have also proposed a mini roundabout is put into the A310 at this junction. See our latest sketch here. 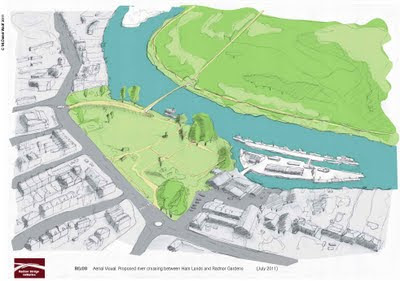 There are a number of reasons why we believe this is a good idea. Let me share a few of these "Pros" here. I am sure there are others. If you can think of any more (or want to share "Cons", reasons why you are opposed to the bridge) please feel free to post them in the comments section below.