A quick update on progress

What we have been up to lately

It’s been a while since I posted a quick update on our progress in driving the Radnor Bridge forward. There are several reasons for this.
The main one is that we have both been busy in our day-jobs and there simply hasn’t been very much to say lately. Richard and I still have so many ideas for the bridge running around our heads, but with the focus in Twickenham on the station and town centre, it has been harder to drum up the necessary interest to promote the bridge. I guess the chance of seeing it built in time for the Rugby World Cup in 2015 is rapidly diminishing.
My energy for driving things forward also took a knock when Richmond Council started to give me the run-around. Challenging us to find out actual numbers of people who would want to use the bridge and why – this would obviously require a proper survey to be carried out, which we do not have a budget for. However, if you are reading this and happy to do so, please do start the ball rolling by sharing your comments/support below.
The final reason, which is perhaps not that significant, is a short while ago my wife and I were out walking on the Ham side and sadly disturbed several groups of men, engaged in some rather unsavoury sexual acts in the woods. Naturally this was not a pleasant experience for the two of us and therefore rather took “the wind out of my sails” for a short while. I began to understand why some have expressed very strong feelings against the bridge being built, but I am also reminded how the bridge can play a significant role in improving the social and economic standing of both sides of this particular bend in the river.
Richard and I are therefore still determined to see the bridge is built.  And, so it would seem are many of you. Indeed lots of local people have verbally expressed eagerness to see Radnor Bridge is built. With this in mind we are both still in regular communication with local activation groups on both sides of the river. And I am still speaking regularly with councillors on this subject.

On a separate point
Recently I was walking in Marble Hill Park and saw some lovely examples of the natural fencing we have proposed for the ‘nature-sensitive’ Ham side of the bridge.
I have included the pictures here to liven up this blog. Once again, do let us know your thoughts. 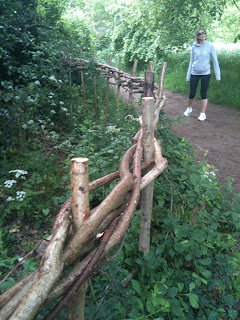 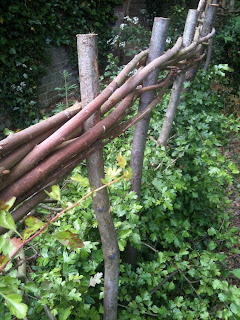