So pleased to see Radnor Bridge getting some attention in the Richmond & Twickenham Times. If you have a copy, take a look at page 14.

It also says, in principle, that we have the backing of MP Vince Cable, which is great news.

In the article (from a few weeks ago), which we commented on here, Lord True said that the bridge would need to be "Majestic". We agree. The design of a pedestrian and cycle bridge across the river from Radnor Gardens would need to be very sensitively designed to fit into its environment and offer our area an architectural statement we can all be proud of.

A majestic bridge will make possible the big idea, which is much needed to re-invigorate Twickenham and Ham. I can't help feeling we have at last taken a collective step in the right direction.

Thank you Tom for writing the article. You've brought a smile to Richard and Mark's faces ;-) 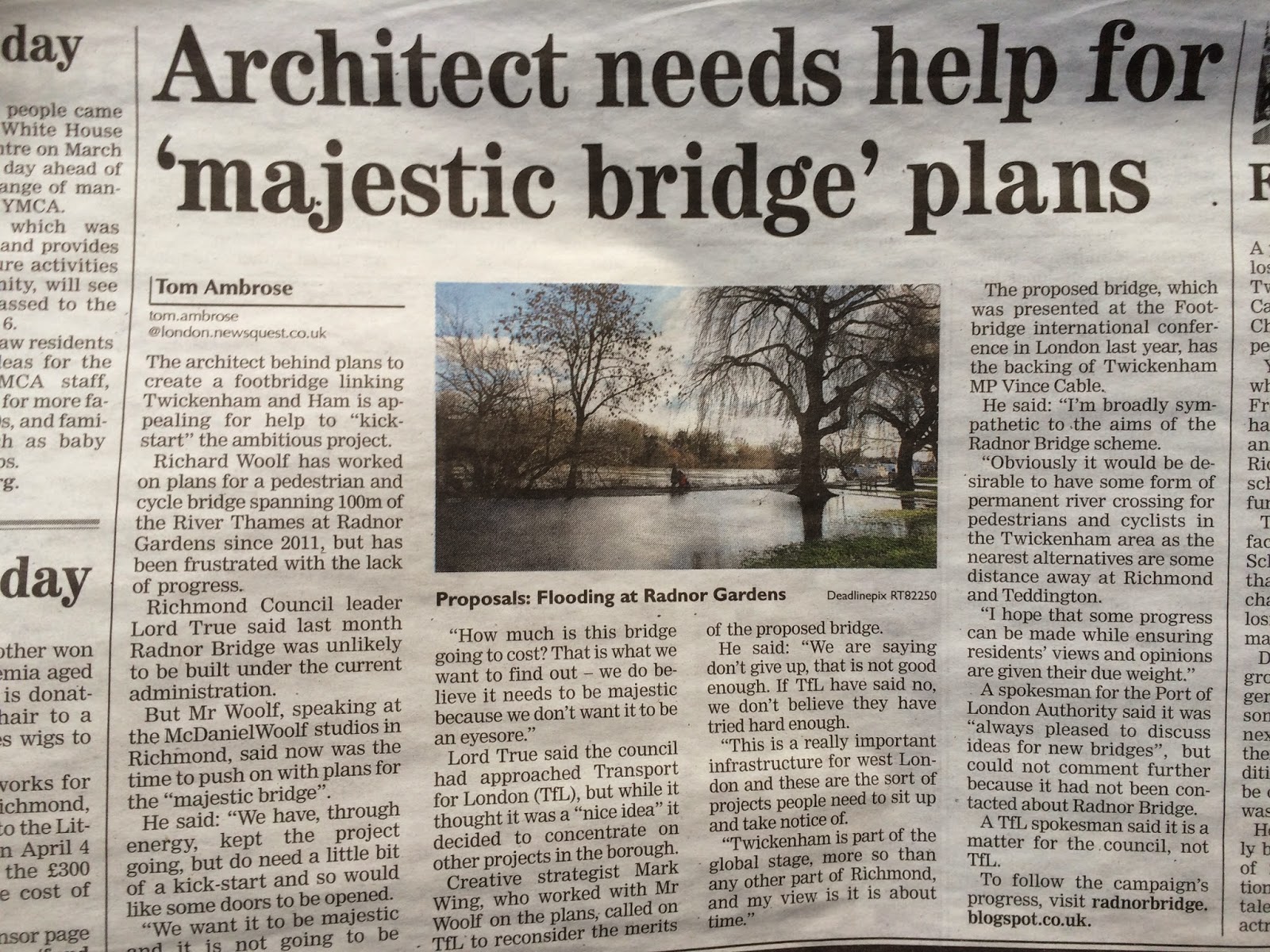 Re-invigoration will only happen with a big idea


There was an interesting article in the Richmond and Twickenham Times recently (see below), in which Lord True updated us on progress, or perhaps lack of, on developments in Twickenham’s town center.


These included references to; the station work, the old post office site, progress with the opening up of King Street to the river, work on pavements and relocating bus stops and his thoughts on the aspiration to see a pedestrian and cycle bridge from Radnor Gardens to Ham Lands.

While he said it would be nice to see a “river park joining up Ham and Twickenham sides of the river” he also added that the Radnor Bridge idea was unlikely in his current term as leader.

Did you see the article? If so, do tell us what you thought of his message here.

The title of the article (written by Tom Ambrose) was “Town Square plans to ‘invigorate’ area”. However, the thrust of the message seemed to dwell on how the ambition to open up Twickenham to the river front (as expressed as a key desire from residents in the 2010 Barefoot Consultation) would now not happen.

What a shame. Perhaps development of a Square is still going ahead, but because of a fear that knocking down the shops on King Street would be “far too grandiose” a plan, the square will no longer deliver on its original brief of ‘re-invigorating the area’ and opening up Twickenham to the river.

It is our opinion that this type of small-minded ambition and inability to stick to the original plan is what has plagued initiatives in the area for too long. Such an attitude would no doubt have killed the Richmond riverside development ideas before they had got going. However, thankfully it didn’t and we all know what a fantastic legacy for the area the redesign of Richmond riverfront has been.

Sadly over the last 30-40 years there has been a serious lack of investment in our beloved Twickenham. Procrastination has been the enemy of every good idea in the making. I’m sure widening the pavements and relocating the bus stops may seem like a good investment today Lord True, but that is only because the investment hasn’t been happening on an ongoing basis over the years.

What Twickenham (and Ham for that matter) have needed for a long time is a “big idea” to truly “invigorate” the area. That is where the Radnor Bridge idea stepped in, as long ago as the Barefoot Consultation in 2010.

We had hoped the Council would grasp this ‘big idea’ back then and we would have had the bridge installed in time for the Rugby World Cup (later this year), when Twickenham will once again be on the global stage.

Clearly that opportunity has passed. But we still keep campaigning. The team here at Radnor Bridge had a meeting last week with a couple of councilors, to see if we could at least get the Radnor Bridge onto the Council’s “Village Plans”. According to the councilors we met with, everyone agrees that a pedestrian and cycle bridge between Twickenham and Ham will happen one day, but there simply isn’t agreement about where that bridge should be.

I ask you, if not Radnor Gardens, where is the best location for this ‘inevitable’ bridge?

When the mini-Holland strategy was proposed last year, Radnor Bridge was one of four locations being considered. Unfortunately none of the other three locations are credible because of the protected view from Richmond Hill, the flow of the river and layout of surrounding streets and homes and then, perhaps most significantly, the obvious lay of the land.

There simply isn’t another location in the area that works as well. Only Radnor Bridge effectively satisfies the requirements of the landscape strategy by working with (not against) the general topology of the land.

Perhaps the biggest challenge to any ‘big idea’ happening in the local area is “how much will it cost?”

This is not a project that has to be covered entirely by local council taxes. Clearly this bridge will need to be paid for by several stakeholders. After all, how else is any significant infrastructure project funded?

In the article, Lord True says that “we are talking millions” and adds that TFL, when approached, had said it was a nice idea but were more interested in other things. And at that the council seems to have shrugged its shoulders and given up.

Surely, if presented with the right argument, it is only a matter of time before the Port of London Authority (PLA), Transport for London (TFL) and perhaps even the Mayor of London’s budget for improving London’s cycle routes, will be able to find the required sums. I therefore challenge you Lord True to ask the TFL (and others) again, but this time with a bit more conviction.

Procrastination is the enemy of all invigorating big ideas. 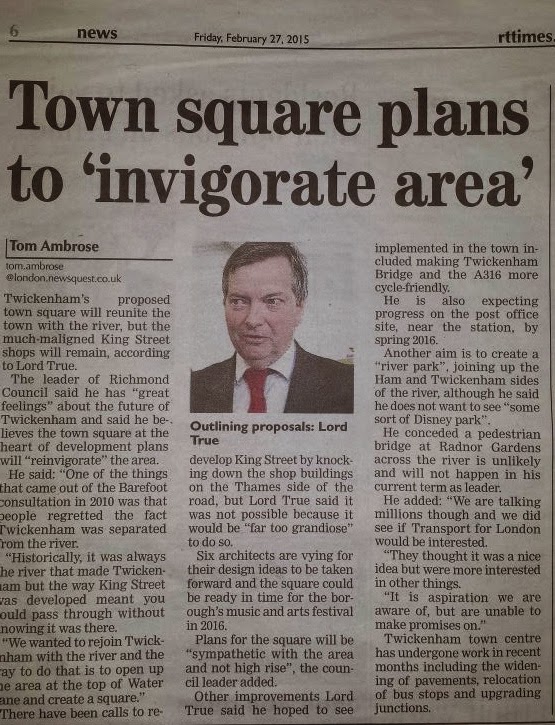