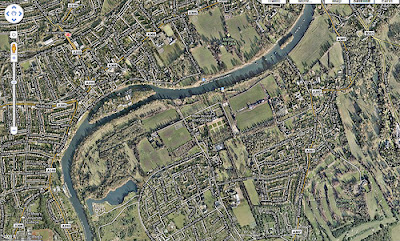 Back in 2010, Mark Wing and Richard Woolf teamed up to propose a new pedestrian and twin lane cycle bridge over the River Thames. The location at Radnor Gardens, as the satellite image shows, seemed obvious from a topological point of view.

This 'big idea' was to grow into a personal exercise resulting in some fabulous open debate and some very interesting personal introductions.

In 2011 we shared the following on this blog;

The opportunity came about because a personal friend of Mark's was engaged as a Councillor in the Richmond-Upon-Thames area, with responsibility for the river and its immediate surrounding areas. So when the Council decided to host a public meeting in July, to give local people the opportunity to shape the future of Twickenham, he encouraged us to share some ideas.

Richard and Mark had been pondering over the crossing for some time and this event in July proved the ideal moment for us to exhibit a proposal that is now slowly gathering momentum.

Key reasons why the Radnor Bridge is the right idea for Richmond Borough;

Despite these "tightening our belt" times, The Radnor Bridge will prove its value to both Ham and Twickenham as being far greater than the cost to build it. Richard and Mark are also convinced this is the right location for such a bridge because;


Mark has lived in Twickenham since 1970 and commented in the press in July;

"…it is hard to believe there has never been a bridge here before. It is the most perfect position to cross the river and will open up both communities".

Richard, an architect based in Richmond, has lived in Ham since 1980. We have worked together on Design Council initiatives and he is also involved in a number of Richmond/Ham developments and therefore has a good understanding of the landscaping strategy for the Ham side of the river. In July Richard was quoted in the press as saying;

"This particular river crossing will make a natural progression of landscape and urban designs long planned for this part of London, making it a very exciting project and one that must surely be built".
Posted by Mark Wing at 02:15