WSP reports and next stages 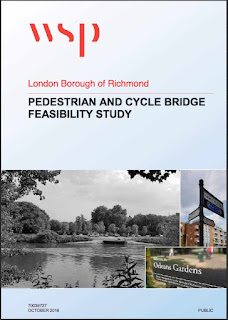 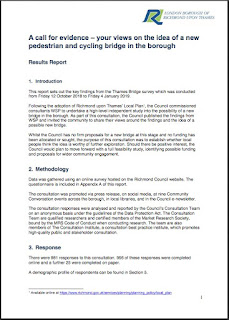 In 2018 the council invited consultants WSP to run a feasibility study on the idea of a bridge to connect Twickenham and Ham.

You can find this feasibility study here; https://www.richmond.gov.uk/media/16407/thames_bridge_feasibility_study.pdf

At the end of 2018 (and running in to the beginning of 2019) the Council invited the public to share its thoughts on the feasibility study. A simple research survey, with standard questions, was put to interested parties. The results of this are available and can now also be found in this feedback document here; https://haveyoursay.citizenspace.com/richmondecs/thames-bridge/user_uploads/thames-bridge-full-report---final.pdf

There were 1000'ish responses (very good for this sort of thing), 80% positive (again excellent) with two bridges (bridge 13 and bridge 15) coming out as most popular. The Radnor Bridge (bridge 13) being one of these.
The Richmond Society shared its feedback here; https://www.richmondsociety.org.uk/new-thames-bridge-consultation-january-2019/

Next stage is trying to get a more thorough technical and financial study on the two serious runners, so we have a workable proposal for supporters and stakeholders to work with, that's all positive and builds momentum.

Radnor Bridge is communicating with Council members, including Cllr Alexander Ehmann [ Chair - Transport and Air Quality Committee at LBRuT ], to keep the debate going and also encourage a WSP follow up consultation/report.

We are now looking forward to hearing what the next steps might be with regard to building a bridge across the Thames to connect Ham and Twickenham, and for Cllr Ehmann's thoughts on the Radnor Bridge option.

Our communications have gone along the following lines;

The Radnor Bridge could provide much needed connectivity between Ham and Twickenham that will reduce the need for people to travel between the two places via Richmond and Kingston Bridges, releasing pressure on roads. As a cycle and pedestrian bridge it fits in with the Council's strategy of encouraging healthy, sustainable means of transport.  It will provide access to Strawberry Hill train station for residents of Ham, who currently have no train station nearby.

The Radnor Bridge would bring a number of schools and colleges within easy reach of people living on opposite sides of the river and has much to commend it architecturally.

The Radnor Bridge team would like to know what next steps the Council will take towards constructing a bridge and whether they would agree to commissioning a follow-up report on the viability of a bridge crossing.

The Radnor Bridge team presented to the LBRuT Air Quality Services Committee meeting on the 21st October 2019 and received a positive response.

Also, Caroline Pidgeon put a question to the Mayor of London in 2018, about whether TfL officers would provide professional and technical support if LBRuT want to proceed with a bridge and was assured that this would be available, if requested.
Posted by Mark Wing at 05:23